Stavanger Airport, Sola, is Norway's third busiest airport with both international and domestic flights in addition to serving as a major hub for offshore North Sea oil installation helicopter traffic. The Royal Norwegian Air Force 330 squadron operates AW101 "SAR Queen" search and rescue helicopters from the previously military east side of the airport. Just north of the field is an air history museum. Originally opened in 1937 as one of Europe's first concrete covered airports.

Runway 18-36 has a CAT II ILS system and is the primary runway with 10-28 mostly serving helicopter traffic.

A big thank you to Foxbat20 (https://flightsim.to/profile/Foxbat20) for the use of the military hangars, air history museum and 330 squadron SAR building.

I'd also like to thank FSDesigns (https://flightsim.to/profile/FSDesigns) for help with testing.

Like other addon airports, probably NOT compatible with "JustFlight Black Square's Real Taxiways". Disable the ENZV package in that product.

I have implemented support for Nool Aerosystems' VDGS utility on gates 8-24. This is the same VDGS module being used in certain payware airports. Using these is completely optional and requires the installation of their module. The utility uses an exe file to collect information from installed aircraft cfg files to determine accurate nosewheel position and a wasm module that will let the display guide you to an accurate stop every time.

The display will automatically wake up as you taxi towards your gate showing you the detected aircraft type and flight number and start giving you distance guidance as you move closer. It will also show you current ingame time while parked.

I have been very happily testing this software for 9 weeks, but as always, you should only install software you're comfortable using and I can't take any responsibility for software not developed by me.

This airport uses my asset pack. It can be downloaded here: ENxx asset pack

If you hate all the red ground markings, I've uploaded an addon that reduces red ground line intensity in the whole sim (screenshots taken with this installed): https://flightsim.to/file/5380/red-painted-lines-fix

v 1.5.0
Implemented asset pack. I've included it in the zip for convenience, but for the future I recommend always installing the latest update.

This file was uploaded to flightsim.to and may NOT be redistributed by other sites or services. 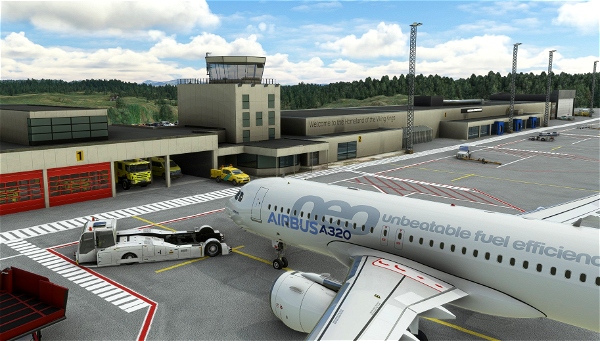 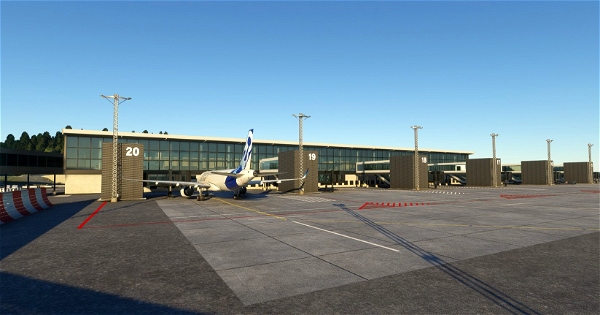 Create a free account now to be able to to keep track of your mods and their latest updates without struggle.
Beroenden

Thanks for your awesome work! Any plans on making the the 330 squadron helipads spawnable? That would be a fitting base of operation for HEMS and SAR missions whit the H145 (while we wait for an AW101 addon)

Runway 29-11 no longer found in the fmc database (pmdg 737). Because the runway is not found, msfs does not recognize any runways or procedures anymore. For the record I'm using navigraph. I have the most recent version 2.09 where I see you renamed the runway, so perhaps that is causing an issue?

Ouch. I did not think of that. Thank you. I'll upload the previous version as an alternate version until I can get that checked out.

v2.0.8 is now back up as an alternate file. This is a larger issue than I have time to take care of this week.

v2.0.8 is available for download again and have updated main file to 2.0.10 with some ILS fixes.

ILS18 and ILS36 have been realigned for new magvar and works in PMDG 737-700 and world map. ILS11 has been removed, like IRL. (Not tested with navigraph).

Will look into more corrections.

Thanks a lot for for your hard work

I don't know what Nool's freeware vs commercial policy currently is. You'll have to contact them and ask about that. There is more info for developers about the product at https://vdgs.nool.ee/getting-started/overview/

Runway and taxi light not working in SIM 9, just landed at sola from Skiathos but was no light on the runway or taxiway😣

Thank you for the bugreport, but I'm there right now and it's working fine here. ENZV actually uses default MSFS runway lights. This is most likely either an MSFS bug or an addon conflict. Feel free to DM me a screenshot of your community folder. Do you have the same issue at my other airports?

Hello 😊) No it works fine at ENBR and other addons you have made, maybe it is conflict with other scenery, i will look in to it and give you a update what cause it 😀

Hey, first of all nice airport its very well made

and I have a question about the vdgs, howw do you link the parameters entered into the sim.cfg to an existing VDGS SimObject, i havent found anything to do that yet?

Would be very nice if you could help me out ;D

Creating a new entry in sim.cfg will add a new simobject to the list in scenery editor, but if you want to add the vdgs to another airport you'll need an airport specific license key from Nool.

For some reason this airport does seem to work on my end, I still see the default scenery. Is anyone else with the same issue? Or am I doing something wrong?

Wow! I can't believe how long this was around before I got around to this. Sorry it was forever ago since release but I am really happy I have this now.

I never bothered with the jetway utility but I have my own from a different dev. Not sure if it works but it doesn't matter.

Great scenery, I have been through Sola quite a few times in the last 20 years and this scenery is an excellent representation!

I have seen the craters next to rwy end 29 and 36. Will fix. Let me know if there's any other issues.

Yesterday a flight to ENZV. This scenery is very very GOOD.

The last version is incredible! I love it!

Exelent work. Especially for us living here, and using the airport in real life as well.

Could you please make a fix to the always forgotten Norwegian airport of ENVE-Valle? Half way between ENZV and ENCN.

As a Ground handler at this airport i must say it`s insanely accurate! Good job to everyone doing this project!

Haven't really flown to this scenery that often or tested the VDGS yet but it sure looks like 5.